skip to main | skip to sidebar

Hello friends.  So if you're looking for a kickass bluetooth gamepad, then get over to Kickstarter and pledge your allegiance (and money) to iControlpad 2.  Hit their web page for all the details, compatible apps, and other funformation.

From the makers of iControlpad, and the OpenPandora.  They are on pace to reach the goal, but it would be a damn shame for this new controller/keyboard not to see the light of day.  Not to mention it may affect their ability to bring us other shiny new open-source products.  The kind of products mainstream companies like Sony and Apple will never bring to market.  And I love my PS3 and iPhone, but there's plenty of room for everybody.

It's a great controller not just because of the game controls, but also a full keyboard.  c64!  Amiga!  Easier text messaging!  Home Theatre PC remote!  Tons of uses.  I have an iControlpad 1, and the directional pad is great.


This isn't your typical retail product...you won't be picking these up at EBGames for $29.99.  This is your chance to be a part of something, without having to do any work.  Win-win!


If you have any interest at all, check it out, then pledge.  If they don't reach their goal (already half way home!), your credit card isn't charged, so you have nothing to lose.

I'm sure this is covered in many other places, blogs, forums, and has been argued to death. But I just experienced the World's Stupidest Copy Protection Scheme Ever.

It's a longer story I'll save for another time, but I have 2 PS3's in my household. Since I'm more active now on the 2nd PS3, last night I copied all my saves to the PSN Plus save cloud (or whatever it's called) and SD cards, from the first PS3.

Out of about 20 titles, only two gave me any trouble: Tetris...and Uno.

The saves for these two games are copy-protected...yup. You can't back them up to any media (unless you're doing a full system backup). Ok fine, I'll put them in the cloud, and pull them down on the 2nd PS3.

Wup, not so fast, Road Runner. You can upload these two saves as often as you like, but, you can only download them once in a 24 hour period! WTF? LOL!

So while waiting for the 24 hour time period to pass, I've been scratching my head wondering if there is any single possible scenario on Earth that would make this kind of protection seem like a good idea. Nope.

Anyway, certainly not the end of the world, I can certainly stand to not play Tetris for a day...and Uno. But seriously, what are EA & Sony thinking? What good would this function ever provide anyone?

Bizarre. Also, I fully expect the next next-gen consoles (PS4, etc) to store all our saves in the cloud, automatically (optional of course). What sort of artificial limits will arrive then?

Up for auction on eBay this week, my very own Open Pandora handheld gaming console...chances are if you are aware of this unit and it's magical powers, then you probably already own one, or want one very much! Act now...here's the eBay link.

Where Have I Heard That Music Before?

Check out this video of Nokia & Microsoft announcing their partnership:

Now, check out my NHL Parody video from 3 years ago, and tell me that's not the same music:

So, where does one find a cool tune like that, suitable for both announcing billion dollar partnerships, and having a go at professional sports leagues?

Apple. Garageband. LOL. (It's one of the 'jingles' that comes with it).

Shameless plug here, but that's what good Internetting skills are all about...

That's a link to their contest, which should earn me more dice rolls...hey, don't get mad at me, I'm just the messenger! You're lucky I'm posting anything!

To reward you for hanging on through that...here's some free LOL you can have...CBC commentator harassed by the Zamboni...no bones broken...

So...they (the NHL) would like $160 for a season long subscription to NHL Gamecentre Live (they spell it Center).

At first glance, that's not even so bad...until you realize that nationally broadcast games are NOT included. This means all Hockey Night in Canada games, and all NHL on TSN games. As someone looking to replace cable, that's a large chunk of the hockey I'd be watching...I don't have as much time during the week).

But, I have a USB tv tuner card for my Mac, I can capture the low-def over the air feed of Hockey Night every weekend, plus fast forward all the nonsense. If that fails, CBC streams HNIC games on their own site as well.

TSN rarely streams games, mostly ones featuring two American teams, probably cause it's cheaper to get those rights in Canada, since none of us care much for the Texas Puckriders, Beverly Hills Implants, Mississippi Queens, Phoenix Coyotes, and other such fictional expansion teams.

Also not included in the so-called GameCentre Live package...all REGIONAL Sportsnet games. Well, you say, that's no big deal, I live in Saskatchewan, days away from any NHL team! Not so, dear reader, not so...because Saskatchewan is kindly lumped in with Alberta, into the Sportsnet West broadcast region. So...no Oilers or Calgary games with NHL Gamecenter Live in Saskatchewan. Well that's fucking outstanding.

But wait, Gamecenter also includes "select playoff games"...basically any American matchups from the first round or two (since CBC and TSN will spilt the Canadian matchups). Boy...not sweeting the pot any with that one.

This is the sound of one hand clapping...'clap'...'clap'...for the NHL and their infinite broadcast wisdom, and being so tuned in with what their audience wants to watch. One would think they had an elite product or something.

Congrats on blacking out your hardcore fans from giving you money. Looking forward to putting my $160 somewhere else yet again this season.

Here's some great settings if you're looking to add reverb to your songs before importing them into NHL 10. I take no credit for these, I found them in the forums, they are not mine, tweak them as you wish.

If your song is too quiet, use the "Normalize" function to raise the level to match most of today's pop/rock songs. Settings as below. The key is to not raise it too much, otherwise the sound gets distorted and sounds bad. 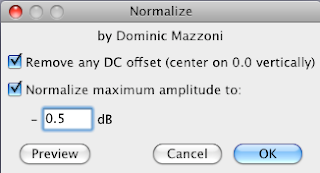 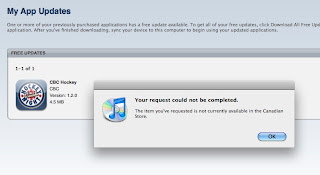 Road Trip to the USA this Season, might take a little longer...

The US has now instantly banned Air Canada from flying from one US city to another, without going back to Canada in between. TSN has the story.
As you can imagine, this will be very messy for International sports teams.
Nevertheless, I wouldn't have phrased it this way:
"It's obvious the U.S. Department of Transportation doesn't watch hockey."
Dude...most U.S. people, and more and more Canadians, don't watch hockey! Anyway, they seem mostly concerned about injured players who don't remain with the team for the entire charter. Well, if I break my leg, I'm probably not going to be much use on the rest of the road trip...
Posted by OddyOh at 9/05/2009 02:57:00 p.m. No comments:

If you haven't seen this, and you drive with your cell phone...prepare for a wakeup call. (Warning: blood and crashes, etc).

Ricky You Broke my iTunes (but I fixed it!)

Ah, had some weird freezing issues with iTunes 8.2.1 today. It would freeze every time I refreshed my podcasts list to get new episodes. I had to go through each podcast feed one by one and click "Update Podcast", so it would list new episodes, but not download them. One of the last ones was my feed for Ricky Gervais Podcast. Seems he's put up a corrupt new video promo for his Carnegie Hall show...as soon as I try to download this video, BLAM. Thanks Jellycast!
Fortunately, I was able to just delete the episode from my feed without downloading, and everything is back to normal. Good grief. Hope this helps anyone else...and since the guy has millions of fans...and there's millions of iTunes users...well, you do the math!
Posted by OddyOh at 8/19/2009 04:51:00 a.m. 1 comment:

Mark Blevis brings us this life-saver of a tip for you pro audio folks out there...finally a way to prevent Final Cut/Audacity, etc from taking forever to load if you have Waves plugins installed.
Decouple Waves plug-ins from Final Cut

Blackberry and NHL: Frienemies til the Bitter End

NHL 10 will be released on September 15th. Here's the most ironic screenshot in video game history (borrowed from Gamespot.com, whom got it from EA.com): 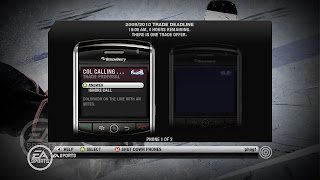 As you can see, BlackBerry devices will feature prominently in the new NHL video game. Players will use these screens to make trades on Trade Deadline Day, review offers, talk with other teams, etc. If I'm Gary Bettman, I just got another giant headache.
In case you've been frozen under centre ice for the last few years, Jim Balsillie, CEO of RIM, makers of the BlackBerry, has been trying to buy an NHL team. At every turn, god only knows why, tiny NHL Commish Gary Bettman and his band of merry men have been doing everything in their power (and perhaps beyond their power) to prevent these sales.
Why? Dunno. I guess they hate ridiculous sums of money? ...No, that's not right...money is the only thing that these guys value. The NHL certainly has shown they DO NOT value their Canadian fanbase, even though it is epic in numbers. Earlier today in fact, in a sign the NHL is running out of legal legs to stand on, they've now effectively resorted to name-calling, in hopes of preventing Jim's bid for the failed Phoenix Coyotes from prevailing in the September 10th auction.
Oh well. Gary knows Jim has the most money, and therefore the best offer. Jim will get the team. Gary will get the boot. Canadians will get their sport back. Oh, it'll be messy, and it may take years, but this is the beginning of the end for the NHL and their monarchal approach to business.
One more note: Soon to be published book suggests even Canadians (especially younger ones) are growing tired of hockey. Well, I think we're all tired of Gary Bettman's NHL, that's for fucking sure. This is the way to run a pro sports league?
At any rate, it's a damn good soap opera to while away the summer days...
Damn, I love that screenshot...can't wait for this game!
Posted by OddyOh at 8/08/2009 04:20:00 p.m. No comments: